For a PDF copy of these
RULES, click here... 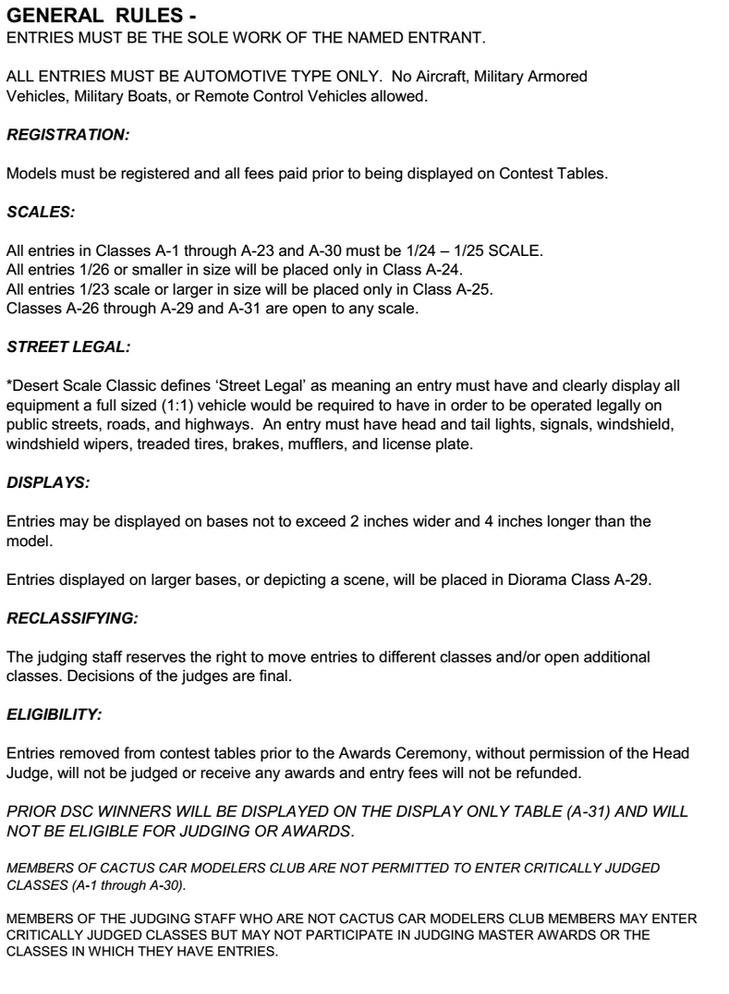 VRule 1.     Entries must be the sole work of the Competitor (Entrant).

VRule 2.     All Entries must be automotive genre only; cars, trucks, motorcycles, personal boats. No aircraft, military armored vehicles, military boats or ships, or remote-controlled items of any kind are allowed.

VRule 3.     Desert Scale Classic General Rules and Categories apply to all Entries in this Event in addition to these specific desertscaleclassicVirtual Venue16 Rules.

VRule 4.     A separate Entry Form must be submitted for each Entry (Model) no later than 11:59 p.m. MST, Friday, May 1, 2020. Entries must be submitted in the manner specified and published by Event staff and must include attachments of at least five (5) digital photo images.

VRule 6.     No Entry may be entered in more than one (1) Category.  Competitors may enter as many Categories (Classes) as desired, but no more than two (2) Entries per Category.

VRule 7.     If an Entry is deemed to better fit within a Category other than that requested by the Entrant, the final decision shall be made by dscV16 Management.

VRule 8.     Entries will be posted on the Event’s website for viewing by the judges and the general public.  The Entrant will not be Identified with the Entry photo images until Friday, May 22, 2020 after awards are announced.

VRule 10.   Entries not the sole work of the Entrant, subject of cosmetically edited digital photo images that change appearance of the Model, prior winners of contests, or misrepresented in any material way may be disqualified by Management. Disqualification renders the Entry ineligible for awards.

VRule 12.   Members of Cactus Car Modelers Club are not eligible to enter any Category other than the Host Club Category.

VRule 13.   All photo images submitted to DESERT SCALE CLASSIC 16 and dscV16 The Virtual Venue and Cactus Car Modelers become property of those entities and are deemed to include permission to use the photo images for publicity, promotion, publication, and dissemination by those entities.

For a PDF copy of these
RULES, click here...
View on Mobile